A few quick pregame thoughts from both UCLA and USC, as well as a sign from ESPN's College Gameday Saturday morning in Eugene.

Share All sharing options for: USC vs. UCLA: Pregame sights, sounds, and tweets

Get your game preview fix from Bruins Nation and Conquest Chronicles.

ESPN College Gameday this morning was in Eugene, home of the other huge Pac-12 battle on Saturday, between Stanford and Oregon. Ducks fans had some fun with the USC deflated ball controversy against Oregon, at Lane Kiffin's (or Kiffen, if you prefer) expense, per the great 30FPS: 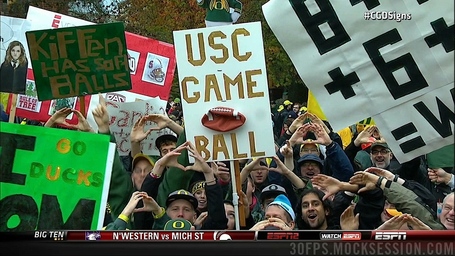 The folks at Bruins Nation are ready for the game:

Gameday against the powder blue. Enough said. Fight On!

Kickoff is at noon, on Fox.