New USC Trojans signee and wide receiver, Nelson Agholor, will be under the tutelage of star receivers Robert Woods and Marqise Lee as the Trojans steal another prospect from the state of Florida. 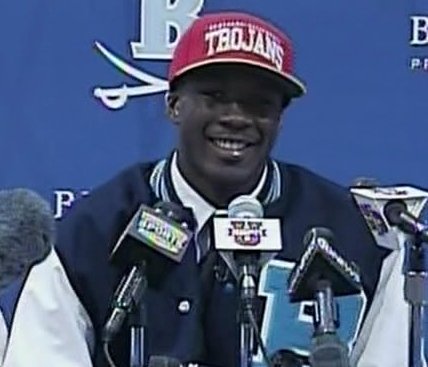 Credit goes to defensive coordinator, Monte Kiffin, who was the main recruiter for Agholor and Florida regional recruiter. Agholor, a Tampa, Fla. product, has stated the reputation that Kiffin has in the area when he was with the Tampa Bay Buccaneers.

Although scouts say his highest ceiling is at wide receiver, Agholor can play two other positions at running back and safety. Agholor was mostly used at running back this past season playing at Berkley Prep., Tampa, Fla.

The coaching staff may give Agholor a look at running back as the roster is thin with the departures of senior Marc Tyler and freshman Amir Carlisle, who transferred to Notre Dame.

For more on Nelson Agholor and USC football recruiting, head over to Conquest Chronicles. Click the link for wall-to-wall coverage of 2012 National Signing Day.