The USC Trojans stomped all over the UCLA Bruins on Saturday night. They stomped and stomped, then took some time off to enjoy some delicious cinnamon toast and a nice warm mug of tea before resuming the stomping in earnest. The end result was a 50-0 bloodbath, much to the delight of the USC fans in attendance. With the loss, UCLA fell to 6-7 and -- thanks to the ineligibility of the Trojans -- are the first-ever Pac-12 South Champions. They'll be heading to the inaugural Pac-12 Championship Game on Friday against the Oregon Ducks, where presumably some additional stomping will occur. USC, however, spent some time after the game engaged in clever gloating.

According to Bryan Fischer of CBS Sports, the Trojans had shirts waiting for them in their locker room that proclaimed USC the Pac-12 South Champions. Odds are good that the Bruins, if they know about the shirts, are probably too weary to take offense. Michael Lev of the OC Register was kind enough to snap a picture of the shirt as worn by Marc Tyler: 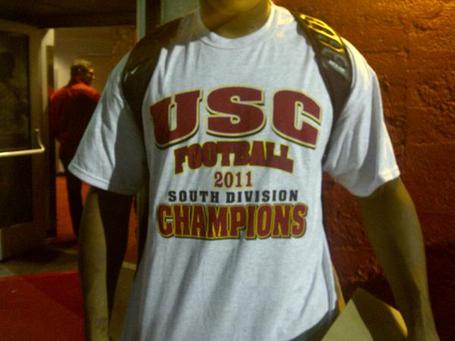 Now, sick burn aside, this is a pretty interesting and fairly unique situation. Sports and sports teams are certainly no stranger to braggadocios items or statements of bombast like this. But as opposed to the majority of these typical sentiments of "We're the real champions" or "Your championship is tainted," the insult rarely comes from the team that has been found guilty of breaking rules. I, for one, am in favor of more boastful shirts of this type. My closet could certainly use a "Pete Rose: Hall of Fame Class of 1991" shirt, or a "Reggie Bush: For Realsies Heisman Winner La La La I Can't Hear You" shirt.

Basically, what I'm saying is that this is awesome, and where can I get one of these shirts?