PHOTO: Nick Young And His Hair

Share All sharing options for: PHOTO: Nick Young And His Hair

See why I'm worried after the jump. 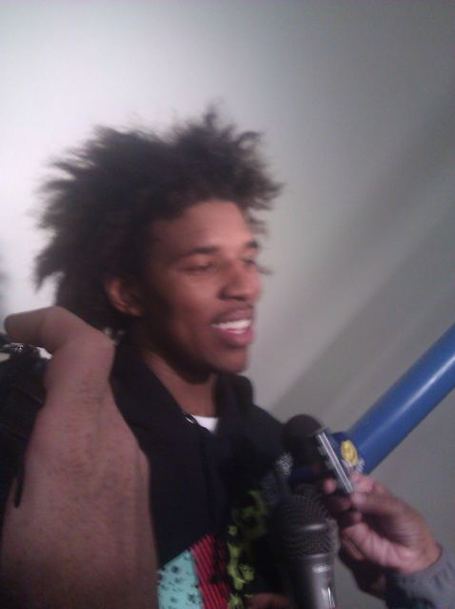 (Thanks to Kurt Helin of Pro Basketball Talk for snapping this!)

The Los Angeles product and Drew League star is clearly making a social statement here, because that's generally the bedfellow of unusual hair growth. Of course, I'm not exactly sure what the statement Young is actually making.

Maybe he's trying to tell the NBA owners that he won't cut his hair until the lockout ends? In which case, the lockout will never end, because people will just stop their negotiating to see how far Young will go before he breaks. Although based on this interview, I'm guessing the man just wants to play.

Maybe he's sending a message to all corporate entities, that he will no longer act in a prim and proper fashion to satisfy the various big moneyed-interests--a doubly important statement considering that he plays hoops in D.C.

Maybe he's trying to make me post about his hair. In which case you succeeded Mr. Young. You succeeded.