The USC Trojans took advantage of the first turnover of the game, as linebacker Malcolm Smith returned a Johnathan Franklin fumble 66 yards for a touchdown with 2:46 remaining in the first half, giving USC a 14-7 lead over the UCLA Bruins at halftime at the Rose Bowl. Before the fumble, the Bruins were driving into at least field goal range, appearing poised to take their first lead of the game. The key play of the drive was a 42-yard catch and run by wide receiver Nelson Rosario, who burned cornerback Nickell Robey on the route.

The USC Trojans have driven inside the UCLA 25-yard line three times tonight, but only have seven points to show for it on those three drives. Head coach Lane Kiffin was happy to be leading at halftime, but thought USC should have scored more. "Obviously we're not executing like we should be, and this game shouldn't be very close," Kiffin told sideline reporter Rebeca Haarlow at the end of the half.

Matt Barkley threw a 14-yard touchdown pass to Robert Woods in the second quarter, but a holding call on center Kristofer O'Dowd nullified the play. It also set the Trojans back to a 3rd-and-19 from the 24-yard line. Marc Tyler gained six yards on third down, bringing in the field goal team for a 35-yard attempt. Only, that attempt never came, as USC shifted formation, and holder / backup quarterback Mitch Mustain threw incomplete on a play that really had no chance.

Both teams moved the ball well on the ground in the first half. The Trojans had 103 yards, led by Allen Bradford, with 71 yards on 15 carries. The 15 carries for Bradford are nearly as many as he had in the last six games (18). Marc Tyler chipped in with 35 yards on six carries. UCLA ran for 126 yards, led by Franklin, who had 102 yards on just 12 carries, including his 59-yard touchdown. The Bruins are 4-0 this season when Franklin rushes for 100 yards.

As might be expected in a late night game featuring two teams playing our their season with nothing on the line except pride, the Rose Bowl isn't quite full tonight. Arash Markazi of ESPN is covering the game, and tweeted this shot of the crowd from the press box earlier tonight: 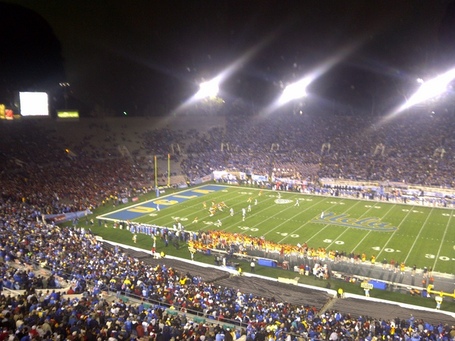 USC will receive the ball first to begin the second half.

For more local college football news, be sure to read the SB Nation blogs for both UCLA (Bruins Nation) and USC (Conquest Chronicles).