USC Vs. Arizona Game To Be On ABC For 19% Of Country

Share All sharing options for: USC Vs. Arizona Game To Be On ABC For 19% Of Country

The USC Trojans will look to get back into the top 25 with a win this week in Tucson against the Arizona Wildcats. Their Saturday night contest is one of four straight night games to end the year for USC (6-3, 3-3 in the Pac-10). Saturday's game in Tucson will be seen regionally on ABC. Roughly 19% of the country will get to watch the Trojans and Wildcats on ABC, while the remainder will have to watch on ESPN3.com, per ESPN: 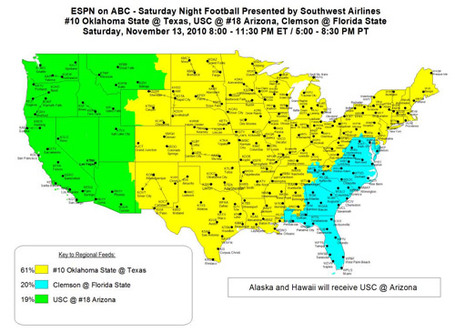 The Trojans are used to playing under the lights this season, as they have played six of their first nine games starting at 5 p.m. or later. Their last four games are also night games, giving them 10 of 13 night contests this season. Here is their remaining schedule:

Saturday's game in Tucson will be called by Ron Franklin and Ed Cunningham.

For more USC news and information, be sure to read SB Nation blog Conquest Chronicles.

USC Grinds Out Victory Over Arizona In Tucson