USC Vs. Oregon To Be Seen By 79% Of Country On ABC

Share All sharing options for: USC Vs. Oregon To Be Seen By 79% Of Country On ABC

The USC Trojans will have a large audience on homecoming, as they will host the Oregon Ducks on Saturday at 5 p.m. PDT. The game will be televised by ABC, with Brent Musberger, Kirk Herbstreit, and Erin Andrews on the call. The ABC/ESPN telecast will be seen by 79% of the country, per ESPN: 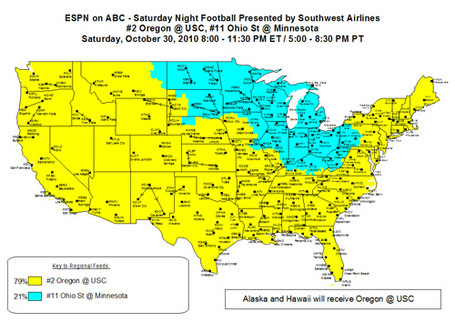 For the 21% of the country that won't get the game on ABC, the televast is available on ESPN3.com.

In addition, the ESPN College Gameday crew of Chris Fowler, Herbstreit, Lee Corso, Desmond Howard, Andrews and the gang will be live from the Coliseum on Saturday morning, preparing for the battle between the No. 1 Ducks and No. 24 Trojans. This season, home teams that hosted ESPN College Gameday are undefeated:

The top-ranked team in the Associated Press poll lost on ABC Saturday night college football on October 9 and October 16, and the BCS No. 1 Sooners lost last Saturday night.The last road team to win at a location which hosted ESPN College Gameday was Oregon, who defeated the Arizona Wildcats last November 21.

For more USC news and information, be sure to read the SB Nation blog Conquest Chronicles.

Oregon Offense Too Much For USC As Ducks Top Trojans