ESPN has released its coverage map for Saturday's game between the UCLA Bruins and the Oregon State Beavers.

The game will be aired on ABC up and down the West Coast and throughout the midwest, as well as parts of the south, including all of Texas, Louisiana, Mississippi, Alabama and Georgia. The game will be aired on ESPN2 on the east coast from South Carolina and up as well as parts of Big Ten country, including Michigan, Ohio, Wisconsin and Iowa. The midwest coast of Florida will also have the game broadcast on ESPN2. Meanwhile, parts of West Virginia, Kentucky, southern Ohio and Montana will be able to watch the game only on ESPN3. 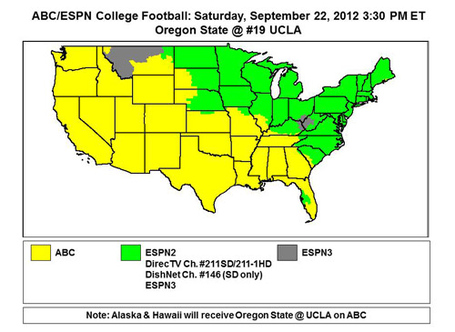 For more on the UCLA Bruins, head over to Bruins Nation. For more on the Oregon State Beavers, check out Building the Dam. For news, analysis and insight from a national perspective, make your way to SB Nation's college football hub.

UCLA Vs. Oregon State: Bruins Knocked Off At Home