Pac-12 Tournament 2012 Bracket And Schedule Information: UCLA To Play USC In First Round

Share All sharing options for: Pac-12 Tournament 2012 Bracket And Schedule Information: UCLA To Play USC In First Round 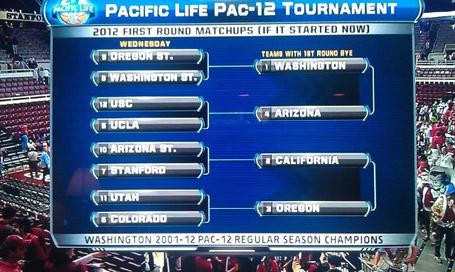 Despite the tumultuous season the UCLA Bruins have had to endure, they still might have a Pac-12 tournament run in them. UCLA will be playing in their hometown in the Staples Center, and will have as good a chance as anyone to win as anyone else.

UCLA will start their tournament as the No. 5 seed and will play their first game on Wednesday at 2:30 PM PT. The new Pac-12 tournament format (with two new teams) means there are two additional first round contests, and the fifth seed will play the 12th place team. The USC Trojans finished in last, meaning only one of the two LA schools will be advancing to the second round.

The UCLA-USC winner will face the fourth seed in the tournament, the Arizona Wildcats.

Here’s the full list of matchups, times, and TV information below: