Share All sharing options for: UCLA Vs. USC: Bruins Reveal All White Football Uniforms Against Trojans

In each of the last three years, the Victory Bell game between crosstown rivals UCLA and USC has featured the teams wearing their respective colors on the field. This year, however, will be a bit different. Whereas the USC Trojans generally wear cardinal red and the UCLA Bruins can usually be seen wearing blue, Adidas has revealed the alternate uniforms that the Bruins will be sporting on Saturday night. 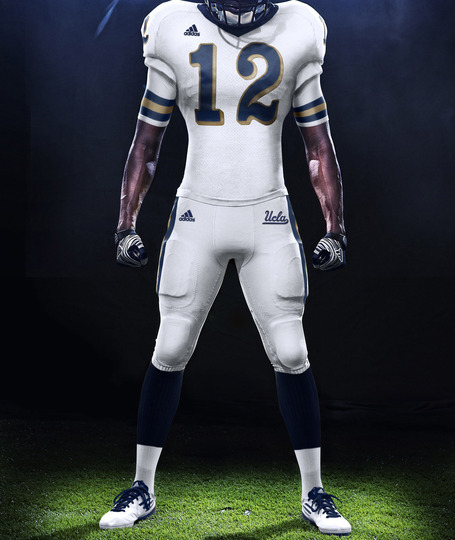 Yes, this year the Bruins will be in solid white, with faux-retro numbers and some sort of weird half-stripe on the pant legs. You can see more pictures at the UCLA website. It's kind of a strange look, and certainly an interesting break from recent tradition.

Also breaking from tradition is the lack of an over the shoulder stripe. The UCLA stripe, over the shoulder, has been present on UCLA uniforms since 1954. UCLA went to powder blue uniforms in 1949. The uniform does have full sleeve stripes on the compression undershirt, a trend popularized by Nike.

Adidas is UCLA's uniform designer, and the apparel company has shown a willingness this year to tweak classic uniforms in order to compete with Nike's "Pro Combat" line. Both Notre Dame and Michigan came out in special rivalry uniforms designed by Adidas earlier this year, and Notre Dame unveiled another special helmet just last week.

UCLA is the only Pac 12 school to use Adidas, and this will be UCLA's most watched game this season outside of the drubbing by Texas. The one thing that hasn't been unveiled yet is what the white helmet will look like. Time will tell how these uniforms look on the field, but at least we won't have long to wait, as the game gets underway in just a couple of hours.