Share All sharing options for: UCLA Basketball: No Pauley Pavilion, No Attendance For Bruins Home Games

With the legendary Pauley Pavilion currently under construction, the UCLA Bruins will be playing their home games at Sports Arena in 2011-2012. While the updates to Pauley will be a very welcome addition once they are completed, the lack of a true home court advantage could greatly hurt the program for a year or two.

As the Bruins fell to 0-2 on Tuesday night, a very small crowd took in the action. The reported attendance from the university was 4,758, though those that were in attendance suggested there were only two or three thousand Bruin fans in the arena. For a program that has earned the label of being a college basketball 'blue blood', this is completely unacceptable.

We have two telling pictures that were captured on television last night. 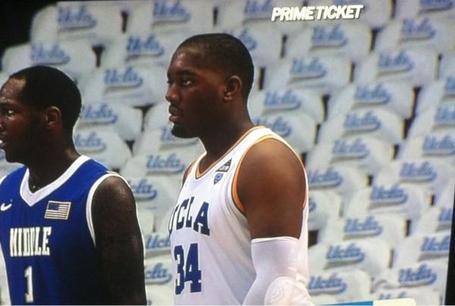 These are tough financial times we are living in and the fan base has to be a little down on their program after beginning the season with a loss, but the team needs support right now. What kind of message does it send to the players -- as well as the highly-regarded recruiting class -- if only 2,500 people show up for the second game of the season?

Bruins fans, go support your team. They need you more than ever right now.