Share All sharing options for: UCLA Vs. Utah Football: Penalties Cost Bruins, Who Trail 7-3 At Halftime

In a snowy first half at Rice Eccles Stadium in Salt Lake City, the UCLA Bruins trail the Utah Utes 7-3 at halftime. With the field covered in snow flakes, both teams relied more on the run in an ultra-conservative first half, thanks to a field looking like this: 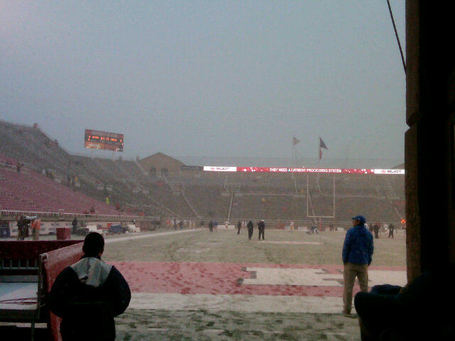 "The footing is treacherous, but other than that we've just got to go play," UCLA head coach Rick Neuheisel said before running into the locker room at halftime on the Prime Ticket broadcast.

UCLA ran the ball 27 times against just six pass attempts for Kevin Prince in the first half. The Bruins outgained the Utes 114 yards to 75 but also had 10 penalties for 76 yards compared to just one for 15 yards for Utah.

Utah ran the ball 16 times for 70 yards and passed the ball seven times for just five yards. Their touchdown came after winning a battle of field position, forcing UCLA to punt from their own five-yard line. The Utes started the subsequent drive from the UCLA 39-yard line, and handed the ball to John White IV seven straight times for a touchdown and a 7-3 lead.

Once UCLA got the ball back, Johnathan Franklin fumbled at his own 25-yard line, which was recovered by Tevita Finau for an apparent touchdown and 14-3 lead for the Utes with 3:25 remaining in the second quarter, but after review the call was overturned as Franklin's elbow was ruled down before he lost the ball.

The Bruins were able to drive down the field, helped partially by an unsportsmanlike 15-yard penalty on Utah for a late hit out of bounds on Prince. However, a third-down sack led to a longer field goal attempt by Tyler Gonzalez, who missed a 47-yarder as time expired.

For for UCLA football news and analysis, be sure to read Bruins Nation.

UCLA Falls Behind In Second Half, Loses 31-6 In Utah