Here are some of the highlights of the Lakers being eliminated by the Thunder last night.

Nazr Mohammed decided to attack the rim with force.

Then World Peace rubs his BFF James Harden on the head where he knocked him.

After a flagrant foul on World Peace, he picked up a technical for his ... reaction.

Bryant went to the one-foot fadeaway a la Dirk.

Kevin Durant then hit an epic three that pretty much put the game away.

There were then plenty of sad faces the rest of the game. 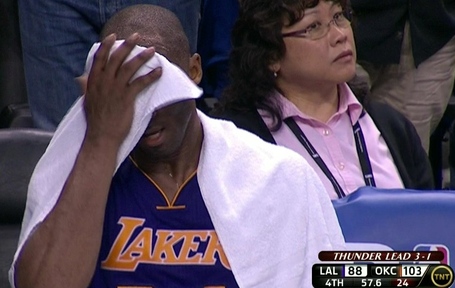 And Kevin Durant got the kiss from his mom.

Check out the SB Nation NBA YouTube channel below and see if you'd be willing to subscribe to the videos.