Steve Blake Practicing The Most Controversial Shot Of NBA Playoffs

Share All sharing options for: Steve Blake Practicing The Most Controversial Shot Of NBA Playoffs

Steve Blake has been talked about more in the last 48 hours than he has the entire season with the Lakers. Trailing the Thunder with just seconds on the clock, Blake took a wide-open 3-pointer from the corner in game two and missed, sealing a devastating loss for Los Angeles.

On one hand, Blake was basically standing alone in the corner, had a clean look at the basket and can hit shots from the outside. On the other, Kobe Bryant has a history of hitting big shots in the playoffs and was visibly frustrated following the loss.

So with game three from Staples Center just hours away, you'll never guess which shot Blake was practicing heavily in warmups. 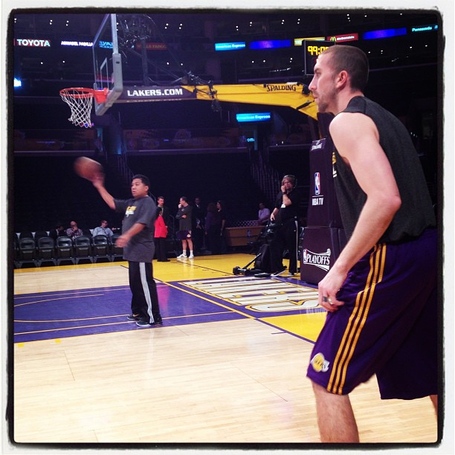 The Lakers know that their collapse on Wednesday night is in the past and there is nothing left to do but step up and try and regain a chance in the series. The Thunder are a heck of a team, but they lack the veteran experience that the Lakers have. Game three is going to be absolutely huge for L.A.

For more on the Lakers and their quest for a title, check out Silver Screen and Roll.