A.C. Green Watches Lakers Vs. Thunder In His Own Jersey [PHOTO]

Share All sharing options for: A.C. Green Watches Lakers Vs. Thunder In His Own Jersey [PHOTO]

A.C. Green is the real Iron Man in Los Angeles. He played in 1,192 straight games, a record that doesn't figure to be broken anytime soon. The current record-holder in the league today has played less than half those games. Green played for the Los Angeles Lakers, Phoenix Suns, Dallas Mavericks and Miami Heat. He should be proud wearing his jersey.

He even ventured out last night in his old jersey of #45! Check out the photo of Green after the jump. 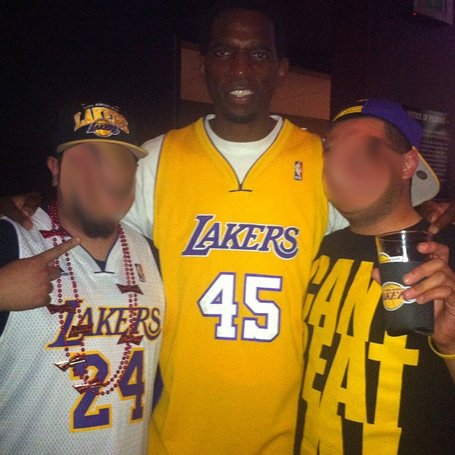 Green was apparently watching the game at the ESPN Zone in Downtown LA. And some fans took notice. Faces who aren't Green must be protected, mostly because they're not Green. And really, going out in a bar might be considered another game on the consecutive matchup streak.