Kobe Bryant has been wearing his current mask for quite some time, particularly since he got his nose broken by Dwyane Wade at the NBA All-Star Game. He's been ultra-efficient since he first put it on, making it seem as if it might not be such a bad idea to keep on playing with it, but Bryant has complained about how oppressively hot it feels to wear that mask non-stop.

There have been multiple comments that the mask looks silly. So why not try to come out in style? After the jump, check out the new mask Kobe will be sporting tonight, most likely to alleviate the heat issues Bryant has been complaining about while wearing it.

Thanks to Lakers reporter Mike Trudell for taking the photo and sharing it with us. 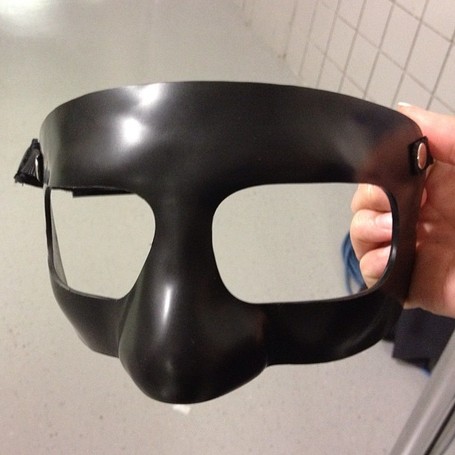 Kobe has always had a Dark Knight feel to him, hasn't he? This mask definitely embraces his Black Mamba moniker.

Lakers Vs. Pistons: L.A. Loses In Detroit On First Of Three-Game Road Trip