Kobe Bryant of the Los Angeles Lakers is dealing with a broken nose that would generally limit the ability of most people, particularly to play a sport like basketball. It's really difficult to coordinate yourself with a broken nose, particularly when trying to play basketball. Rip Hamilton is the most recent example of an NBA player who has proven he can produce with consistency using this mask, although plenty of other basketballers (including LeBron James) have used the mask for various purposes.

Bryant debuted the mask tonight to play against the Minnesota Timberwolves. We'll let you judge the quality of the mask after the jump. 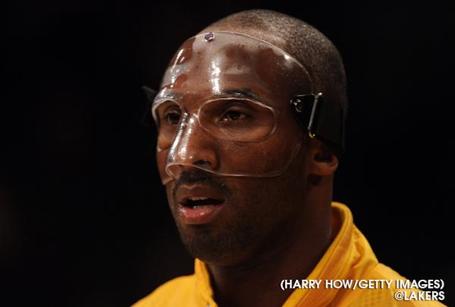 All we know is that Kobe and Shaq can never escape each other, no matter how hard they try to.

(View the larger version of the image)

To discuss Kobe and the Lakers, check out Silver Screen and Roll. To discuss the Lakers-Wolves game with Minnesota fans, head on over to Canis Hoopus.