If Kobe Bryant and Dwyane Wade meet in the 2012 NBA Finals, remember this bizarre incident where Wade treated the All-Star Game a little too seriously. Don't expect Bryant to be too happy about what happened.

After the jump, see the video, and perhaps Bryant being more dinged up than he let on. 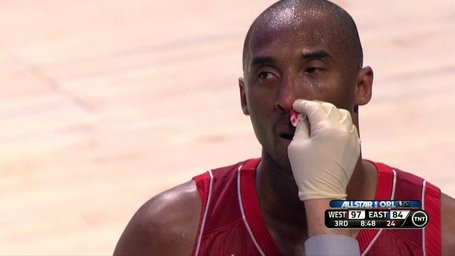 The injury itself was unremarkable, but Kevin Hart's reaction was outstanding.

This is a little strange, isn't it? Even weirder is the fact that Bryant seemed to be more injured than he let on.

Kobe Bryant getting further evaluation for headaches and didn't talk to media.

Yeah, I'm sure Bryant will be healthy, but that's a lot of pain to deal with for All-Star weekend in general. Will he take his annoyance on his injury out on Miami the next time they play? Don't be surprised if he does. It is in Kobe's nature to inflict pain on those who cross him.

To discuss Kobe and the Lakers, head on over to Silver Screen and Roll. To talk about Wade and the Heat, check out Peninsula Is Mightier.