When asked about the latest sensation in the NBA last Thursday in Boston, Kobe Bryant told reporters that he had no idea what Jeremy Lin was doing in New York. One night later, the Knicks' point guard torched the Los Angeles Lakers for a career-high 38 points, just the latest in one of the more unexpected runs in NBA history. Lin and the Lakers - five of them, in fact, trying in vein to stop the point guard - are featured on the cover of this week's Sports Illustrated. (per @jose3030): 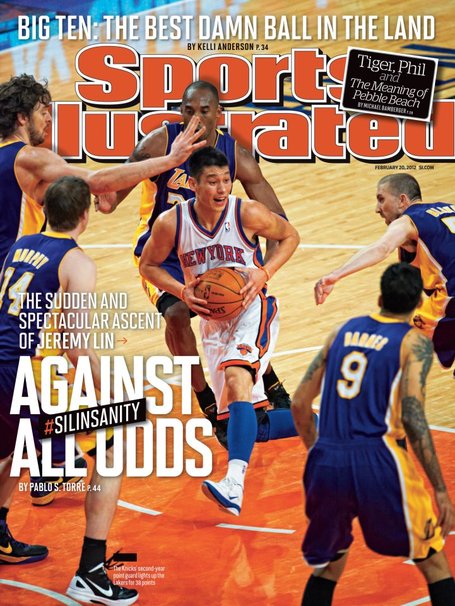 Lin has scored 109 points in the last four games, the most since the NBA/ABA merger in 1976-1977 for a player in his first four NBA starts, breaking the previous record held by Allen Iverson (101 points). Lin, the Harvard grad from Palo Alto, scored 133 total points in his first 39 career games, all off the bench.

After one season in Golden State, Lin was cut by the Warriors, then let go by the Houston Rockets before ever playing with them. Lin seems to have found a home in New York, giving Madison Square Garden a hero to root for. How long will the ride last? I don't know, but it will be fun.