2012-13 NBA predictions: Just how many games will the Lakers win?

With the 2012-13 NBA season beginning on Tuesday, we combed the Internet in search of predictions regarding this year's Los Angeles Lakers squad (and made one of our own). There are many, and most of them are bad.

Share All sharing options for: 2012-13 NBA predictions: Just how many games will the Lakers win?

Sports predictions. I'm horrible at them*. You probably are too. Most people are. Maybe you think predicting the outcome of events whose results are dictated by hundreds of series of random events is silly and fruitless (and you're probably right). With the NBA regular season tipping off on Tuesday, there are loads of NBA predictions on the Internet at the moment, so I thought it might be fun to grab the ol' digital longboard and surf the web for a comprehensive look at how folks (experts, non-experts, pseudo-experts, and THIS GUY) think the 2012-13 Los Angeles Lakers will fare.

(And feel free to chime in with your predictions in the comments. Just be wary that you will be held accountable for said picks and mocked mercilessly should you fail. No big deal.)

On Aug. 21, ESPN's Summer Forecast -- which is comprised of 100 of ESPN's greatest basketball minds -- predicted the Lakers would go 59-23. The projected win-loss record is identical to the prediction made for the Oklahoma City Thunder, but the Thunder are ranked above the Lakers in the Western Conference due to decimal rankings from the experts' predictions.

Crystal Ball Status: Faulty. Like a Nintendo cartridge you have to blow into to get it to work properly.

Crystal Ball Status: Balanced. Fair. Like what FOX News claims to be, but isn't.

CBSSports.com's NBA Insider Ken Berger didn't go so far as to predict regular season records, but did predict that the Lakers would win the West (especially after the Thunder's loss of sixth man James Harden) and picked the purple and gold to topple the Miami Heat in the NBA finals, providing a disclaimer that his pick could have gone either way. Waffles anyone?

Admitted Lakers HaterTM Scott Carefoot of The Basketball Jones, who calls this year's Lakers squad "eminently more unlikable than the 2010-11 Heat were", picks them to finish with the fifth best record in the NBA behind the No. 4 Boston Celtics, No. 3 Denver Nuggets, No. 2 Thunder and No. 1 Heat.

On the other end of the spectrum, a poll of Lakers fans conducted by The Los Angeles Times on Aug. 31 revealed that 87 percent of them think the team making the NBA Finals is a foregone conclusion. Fifty percent of those who were polled think the Lakers will win 64-72 games in 2012-13. While I respect the optimism, the lack of objectivity here is staggering. Let's put the Kool-Aid down and dial it back a bit, homers.

Crystal Ball Status: Tired. Repetitive. Like a needle skipping on Randy Newman record. (You know the one.)

In an article posted on Aug. 17, Justin Welton of Yardbarker.com predicted that the Lakers would finish at 60-22, with their stiffest competition in the Western Conference coming from the Thunder and the Spurs. Bold.

Crystal Ball Status: On the fritz. Like the TV in your living room in the 80s that you had to bang the top of to get the picture to clear.

Andrew Ungvari of LakersNation.com posted a Lakers predictions piece on July 27th and projected a 61-21 record for the Lakers. Bolder.

In September, Lakers small forward Metta World Peace told Max Kellerman and Marcellus Wiley of ESPN 710 AM that he wants to go 73-9 and beat the 1995-96 Chicago Bulls best regular season record in NBA history of 72-10. World Peace said, "With Dwight Howard, (Steve) Nash, Kobe (Bryant), myself, Pau (Gasol) and then (Antawn) Jamison and a lot of great additions it's something that's possible." BOLDEST. Again, I respect the optimism (and think that every player should strive for excellence), but if you let a prediction like that come out of your mouth and it'll follow you around all year. It's bulletin board material. But then again, World Peace has never been one to choose his words wisely.

Crystal Ball Status: Informative, yet boring as hell. Like every textbook you ever had.

ESPN.com's Marc Stein released his preseason Power Rankings on Monday morning, and had the Lakers at No. 3, down one spot from his training camp rankings released on Sept. 28th. The Spurs landed at No. 2, while the Heat retained the top spot.

The professional prognosticators, oddsmakers at Sportsbook.com, have the over/under for Lakers regular season wins set at 56.5, tied for third with the Spurs and slotting them behind the Thunder (59.5) and the Heat (61.5). The Lakers opened at 59.5, tied with OKC for the second highest number, but likely slid down a notch due to their lackluster preseason.

Last but not least, as a part of SB Nation's great series of NBA predictions videos, Drew Garrison from Silver Screen & Roll picked the Lakers to win 54 games, one of the more pragmatic predictions we've seen thus far.

Crystal Ball Status: Fully operational. Like the Death Star, without the Death part.

As for this cautiously optimistic Lakers writer, I had them pegged for 56 wins before the preseason. Common sense tells me that with Kobe's balky foot, a winless preseason, a team that clearly needs more time to gel on offense (and some facets of defense), and a bench that is shaping to be somewhere between "slightly below average" and "I have to change the channel while the second unit is on the floor", I've adjusted that projection to 53 wins. I realize that might seem a bit low (especially to those of you wearing purple and gold glasses), but hey, set your expectations a smidgeon low** and if they exceed them, "HOORAY SPORTS!" If they fall short of your expectations, your level of disappointment won't be soul-crushing. And if you're right on the money, congratulations. Nobody cares. Here's a certificate for you to print out and frame and hang in your living room, dork. 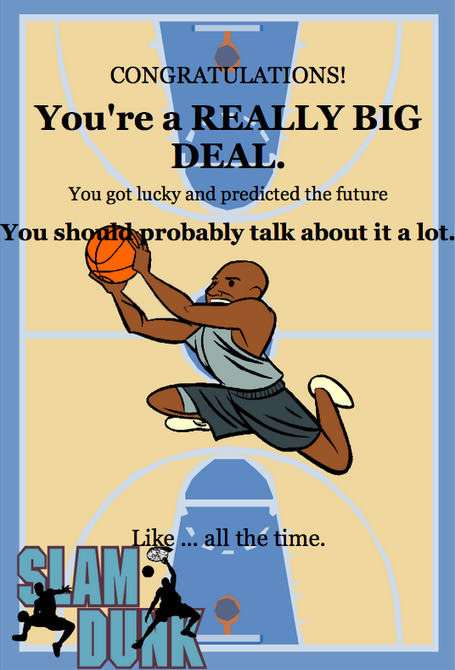 *For what it's worth: I picked the Los Angeles Angels beat the Philadelphia Phillies in the World Series this year (ouch), picked the Baltimore Orioles to finish last in the AL East (whoops), The Oakland A's to win 71 games (DERP), and the Arizona Diamondbacks to win the NL West (Jeez, I suck at this stuff.) So there's that.

**This applies to sports only. In life, reach for the stars. (Even though you'll never reach them because even the closest ones are like 25 trillion miles away and you're like what ... 5-foot-10?)