For one of the first times in recent memory, the Los Angeles Clippers will be ahead of the Los Angeles Lakers in the standings when the two teams face off tonight. The Clippers (9-5) are 1.0 games ahead of the Lakers (10-8) in the Pacific Division standings, which is maybe the reason that tickets for the game are relatively cheap, at least by this season's standard (buy tickets here).

It is worth noting that both of those games being hosted by the Clippers are nearly twice as expensive, on average, than other Clippers games. Still, it's interesting to see the paradigm shift ever so slightly. 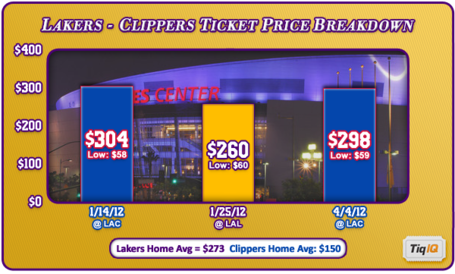