Free-agent swingman and former scoring champion Tracy McGrady appears to be interested in joining the Los Angeles Lakers, if his official Twitter account is any indication. Friday, he tweeted "Yes or No" and attached a Photoshopped photo of himself wearing a Lakers uniform: 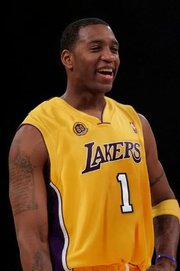 Leaving aside the fact that L.A. still employs Kobe Bryant, and would thus seem to have little need for McGrady, questions abound about his potential fit with the Lakers. In a point-forward role for the Detroit Pistons last season--on a one-year deal for the league's minimum salary--he bounced back from a rough two-year stretch in which he played just 65 games. Still, he's yet to prove he's committed enough to defense. Plus, with Bryant, Pau Gasol, and Andrew Bynum all needing touches, it's doubtful that L.A. could use another ball-dominant offensive player.

McGrady's bounce-back year included averages of 8 points, 3.5 rebounds, and 3.5 assists. He shot 44.2 percent from the floor and missed only 10 games.