Share All sharing options for: Kobe Bryant & Kevin Love Give Us Reason To Remember Moses Malone

Consider this week a lesson in basketball history. A pair of milestones have fallen or will fall this week in the NBA, and both involve Moses Malone. Last night in Minnesota, former UCLA Bruin Kevin Love had 23 points and 17 rebounds for the Timberwolves in a close loss to the Dallas Mavericks. The game was Love's 51st consecutive double-double, which happens to tie Malone for the longest streak of double-doubles since the NBA-ABA merger in 1976. In fact, here are the top three double-double streaks of the last 35 years:

Malone was a fantastic player, and for many years. He won three MVP awards (1979, 1982, and 1983), four All-NBA first teams, four All-NBA second teams, and famously led the 76ers to the NBA title in 1982-83, sweeping the Lakers to complete the run that Malone referred to as "fo, fo, fo" through the playoffs (four wins in each round). 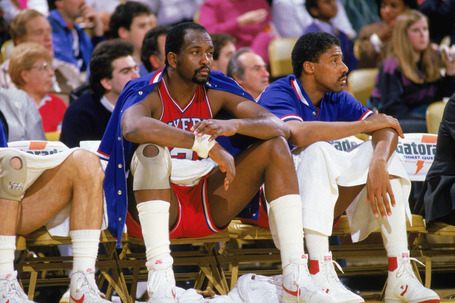 Well, the Lakers can't get that title back from 28 years ago (James Worthy can't unbreak his leg, for one thing), but they can gain some tiny measure of revenge tonight. The Lakers are in Atlanta to face the Hawks, and Kobe Bryant is closing in on another milestone. Kobe has 27,397 points in his great career, a mere 12 points shy of Mr. Malone for sixth place on the all-time NBA scoring list.

The odds are overwhelming that Kobe will pass Malone tonight. Bryant has scored 13 or more points in 62 of 64 games this season. But even though this will mark another NBA player passing Malone in the record books, don't feel bad for Moses. Rather, use this week as a remembrance of just how great a player Moses Malone actually was.