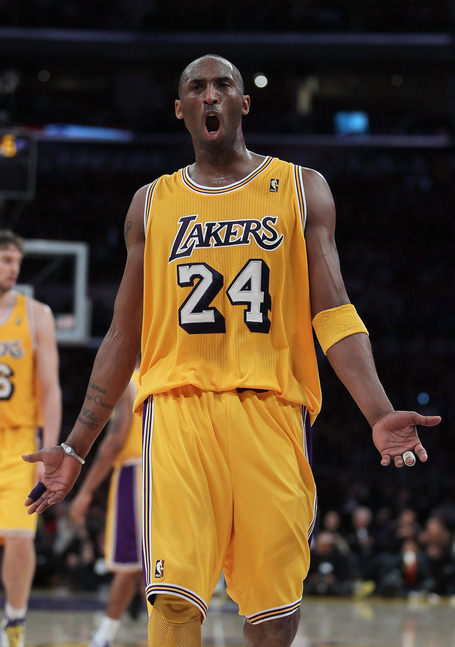 The Los Angeles Lakers are the road team tonight at TD Garden, but the Lakers will be wearing their home gold uniforms when they battle the host Boston Celtics. The Lakers will do battle on TNT tonight in their 1971-1972 throwback jerseys, according to Kevin Ding of the Orange County Register. Kobe Bryant and the Lakers wore the same uniforms in their 103-89 loss to the Celtics at Staples Center on January 30, and according to Ding, will wear the old school threads in two more games this season.

The 1971-1972 uniforms (left) feature the more classic rounded neck, and are missing the purple stripe down the sides of the jerseys that are prominent today. Also, the white numbers on the front and back of the throwback jerseys are surrounded by a thick blue shadow.

The gold versus green is reminiscent of the USC/UCLA football rivalry, which switched back to the baby blue of the Bruins against the cardinal of the Trojans in 2008. While the throwbacks are a nice touch, and no doubt a potential money maker for the NBA, we can all be thankful both teams have eschewed the short shorts of yesteryear.

For more information on tonight's game, be sure to read Silver Screen and Roll.

Kobe, Lakers Outlast Celtics In Second Half, Get Much Needed Win