The Los Angeles Lakers aren't giving much of an indication as to whether they think Kobe Bryant will or will not play on Christmas Day against the Chicago Bulls. For those who want the bad side of this and a grim sight, check this photo of Kobe's hand during the game against the Clippers today courtesy of Arash Markazi of ESPN Los Angeles. 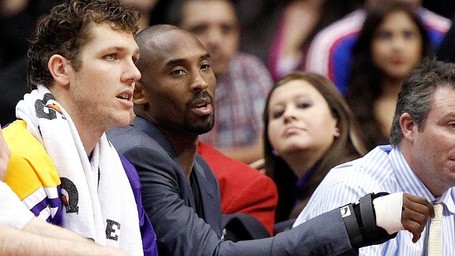 Regardless of the originally grim prospects, the early indications are leaning toward "probably".

@LakersReporter
Mike Trudell Bynum & Gasol among those that definitely expect Kobe to play; Mike Brown unwilling to go past "day to day."
Dec 22 via Twitter for iPhoneFavoriteRetweetReply

@KevinDing
KEVIN DING D-Fish on Kobe: "He'll cut his wrist off and play with one before he misses Sunday."
Dec 22 via TweetDeckFavoriteRetweetReply

I don't think Fisher or Brown have actually talked to Bryant, but they probably know that when the superstar commits to playing, he'll play, and that's probably what they've seen from him in practice. Obviously the Lakers wanted to make sure Bryant was in good health before letting him out there today, but they seem fairly confident that he'll be ready to go next Saturday.

This is definitely a reputation thing with Kobe, and he'll be sure to be out on the floor if he can.

To discuss Kobe and the Lakers, head on over to Silver Screen and Roll.