It's beginning to look a lot like Christmas, and with it comes the excitement and joy of spending time with friends and loved ones during the holidays. Luckily, one Christmas day tradition that you and yours won't have to miss is watching some NBA action, including the marquee matchup of the Los Angeles Lakers taking on the Chicago Bulls at the Staples Center. Not getting excited yet? Make the jump, it'll help. 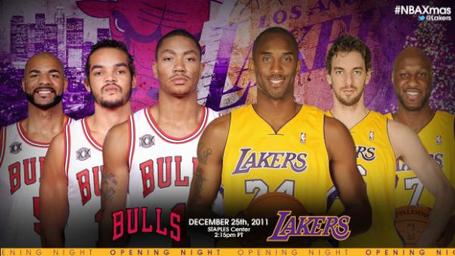 Yeah, when the Christmas game graphics start coming out, that's when I know it's really happening. Kobe, Pau and the newly hired Mike Brown take on Rose, Boozer, and company in a meeting of the losers bracket if you will from last season's Conference Finals. It will be the 13th consecutive Christmas that the Lake Show is playing, and sport a 4-8 record over the last 12 meetings, including a whooping put on them by the Heat last season.

And no, this isn't the only game on the docket that day:

Full NBA schedule will come out next Tuesday.