So much for a quick resolution to the lockout. Talks broke off earlier today in New York City between the players and the owners, and the ensuing rhetoric doesn't sound like the talk of a group of individuals ready to settle down and come to the table. We have a PR battle on our hands! 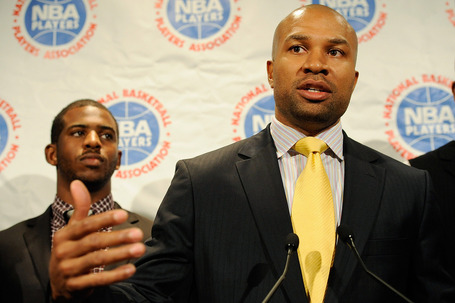 The league is spinning their side of the story through their owners. But Derek Fisher, Los Angeles Lakers guard and president of the National Basketball Players Association is ready to stand up and fight to hold his ground. The resulting fracas that's likely to ensure can only mean more intransigence in these talks are on their way.

Here are some of the quotes from Fisher after the jump.

"I want to make it clear: You guys [the reporters] were lied to earlier [by the owners]."

"You guys were lied to earlier. it's that simple. we spent the last few days making our best effort to try to find resolution here."

"They're interested in telling you one-sided stories that are not true."

Fisher insists that the players did not walk out on talks today.

It's a bold move by Fisher to call out the league, but will it really win the players any positive PR? The days and weeks of negotiating ahead will answer that question, but this "he-said, she-said" game must be getting old to everyone not involved in the process.

To discuss Fisher's comments with Lakers fans, head to Silver Screen and Roll.