Lakers Vs. Rockets: Justin Bieber To Blame For Lakers First Half Woes

Share All sharing options for: Lakers Vs. Rockets: Justin Bieber To Blame For Lakers First Half Woes

The Houston Rockets continued their quest to ruin the celebration of the Los Angeles Lakers, widening their lead to 62-51 at halftime over Los Angeles at Staples Center.

Jeanie Buss was interviewed by Cheryl Miller during the second quarter, and said that while she has Phil Jackson's ring for safekeeping, the ring was temporarily loaned to apparent superstar and American succubus Justin Bieber, who is sitting courtside tonight (image courtesy of bubbaprog at  mocksession.com): 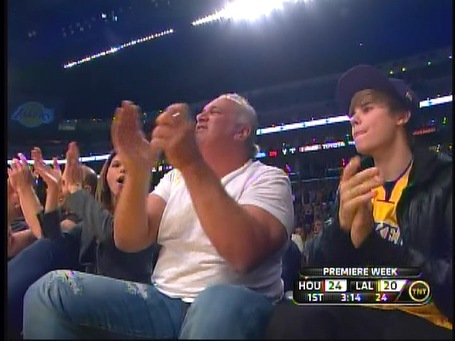 The Rockets out-rebounded the Lakers 29-24 in the first half, and shot 47.9% compared to just 38.9% for the Lakers. The Lakers made just two of 11 three-pointers, missing all five in the second quarter.

Kevin Martin of the Rockets picked up a garbage technical foul late in the second quarter, thanks to the new NBA rules, cracking down on human emotion. Martin had a gesture toward the official, but it wasn't much more than a single arm wave, but paid the price.

Martin had 19 points in 16 minutes, to go along with his back court mate Aaron Brooks, who pumped in 18 points.

Lamar Odom had 12 points on 6-of-8 shooting and six boards, but was limited to 12 minutes after picking up two fouls early in the first quarter. Pau Gasol also scored 12 points, but none in the second quarter. Kobe Bryant scored 13 points, but was just 4-of-13 shooting.

For more Lakers news and information, be sure to read the SB Nation blog Silver Screen and Roll.