Share All sharing options for: Lakers Vs. Rockets: Houston Leads 33-26 After First Quarter

The Los Angeles Lakers celebrated their 16th championship by collecting their rings and unveiling a banner at Staples Center, but the Houston Rockets started off hot, taking a 33-26 lead after the first quarter in tonight's season opener for both teams.

Head coach Phil Jackson opened the player introductions by saying of Luke Walton, "It’s been said that Bill may be his father, but he’s really my son." This came after assistant coach Rasheed Hazzard was accidentally skipped over during coach introductions, and before Ron Artest pointed to the wrong part of the arena to announce the unveiling of the championship banner. 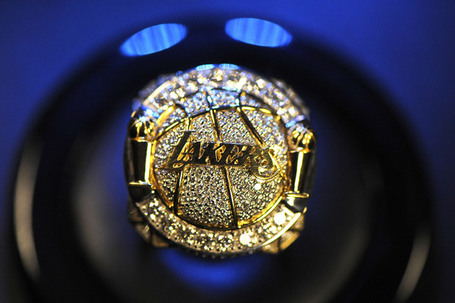 While the Lakers were getting their rings, the Rockets were back in the locker room, per beat writer Jonathan Feigen of the Houston Chronicle:

Rick Adelman said Rockets will skip the Lakers' ring ceremony 'unless we get raffle tickets for Ron's ring.'

Guards Aaron Brooks and Kevin Martin combined for 27 points on 8-of-14 shooting, including making five out of seven three-point attempts. The Rockets shot 47.8% for the quarter, compared to just 36.4% (12-of-33) for the Lakers.

Pau Gasol led the Lakers in the first quarter with 12 points, while Ron Artest pumped in eight points, including two threes, and six rebounds.

Rookie forward Derrick Caracter entered his first NBA game quite early, subbing with 8:43 left in the quarter for Lamar Odom, who picked up two quick fouls.

For more Lakers news and information, be sure to read the SB Nation blog Silver Screen and Roll.