Matt Kemp Ejected While Sitting In the Dugout

Share All sharing options for: Matt Kemp Ejected While Sitting In the Dugout

Arguing balls and strikes is never allowed in baseball and Thursday Matt Kemp found out that rule applies even if you are sitting on the bench.

Kemp was ejected by home-plate umpire Angel Campos during the second inning of Thursday's game while Andre Ethier was at the plate. He didn't, however, leave without getting his money worth. Kemp came out of the field and laid into Campos, including a few choice words.

The verbal tirade led to at least one youngster in the crowd getting earmuffed. 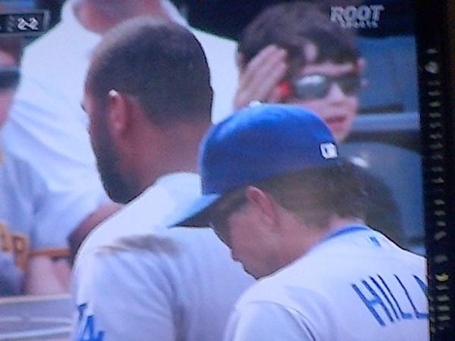 Full video of the ejection after the jump.

After the pitch, Campos turns to the Dodgers dugout and says what sounds like, "I don't want to hear you again, I'll tell you right now." Not long after, Campos ejects Kemp. While it may appear Kemp kept arguing, after the game, Dodgers manager Don Mattingly said that wasn't the case.

"Guys were barking about pitches. Angel looked over and said, 'I don't want to hear anymore.' Just a little bit later, Matt said, 'Let's go Dre' and got thrown out."

The Dodgers lost the game Thursday and now have to hope they won't lose Kemp to a suspension as a result of the incident.

For all news and information regarding the Los Angeles Dodgers, please visit True Blue LA.