As the Los Angeles Dodgers open their season in San Diego at Petco Park facing the Padres, most of the focus is on the field. But outgoing owner Frank McCourt also made the trip to San Diego, a rare public appearance of late for the embattled owner who plunged the Dodgers into bankruptcy.

McCourt agreed to sell the Dodgers for a record $2.15 billion to Guggenheim Baseball Partners, a group headed by Guggenheim CEO Mark Walter, but led at its face by Magic Johnson. The sale is expected to close by April 30.

Johnson came to San Diego as well, and is seated alongside McCourt just outside the Dodgers dugout on the third base side of Petco Park. Here is a photo of the two before the game, from Dodgers photographer Jon SooHoo: 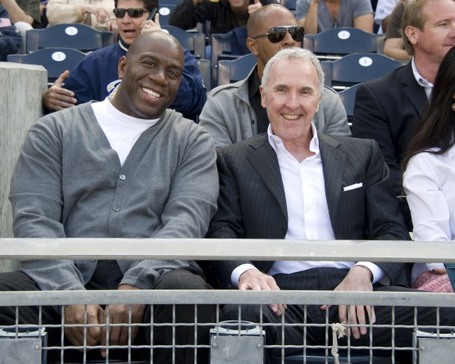 For walking away with somewhere near $1 billion in profit after all is said and done, wouldn't you smile, too?

Manager Don Mattingly said he met with McCourt on Thursday before the game, and that given the busy schedule of the next month for both the team and McCourt, this was essentially a goodbye meeting.

"I basically thanked him for giving me an opportunity when really a lot of people wouldn't have," Mattingly said. "I appreciated the confidence he had in me."

For more Dodgers news and notes, be sure to read True Blue LA.