Ryan Braun's shallow sacrifice fly was deep enough to score Nyjer Morgan from third base, giving the Milwaukee Brewers a 3-2 win in 10 innings over the Los Angeles Dodgers Wednesday night at Miller Park. Though replays of the final play showed Morgan to be out at home, which didn't sit well with Dodgers manager Don Mattingly. 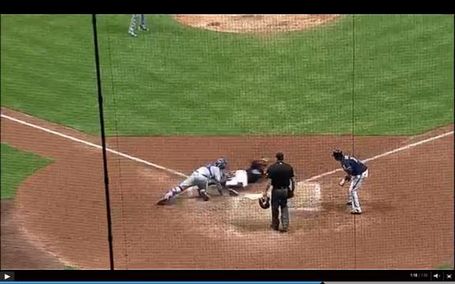 "Having the luxury of seeing the replay, obviously we should still be playing. I guess it's another argument for instant replay," Mattingly said after the game.

Both starting pitchers were strong, with Chris Capuano allowing two runs in his six innings with a pair of walks and four strikeouts for the Dodgers, and Zack Greinke allowed two runs in seven frames for Milwaukee.

Mark Ellis drove a ball to right field that caromed off the glove of Corey Hart in right field in the first inning for a one-out triple. Ellis was driven home on a single to left field by Matt Kemp.

Hart received a similar gift in the second inning, doubling off the glove of Andre Ethier on a catchable ball in right field, then scored on a base hit by Matt Gamel to tie the game at 1-1.

The Dodgers took the lead in the top of the fifth on an RBI groundout by A.J. Ellis, but Aramis Ramirez tied the game with a solo home run to leadoff the bottom of the sixth inning.

For more news and notes on Dodgers baseball, be sure to read True Blue LA.