The Los Angeles Dodgers had the honor of having two great left-handed pitchers in their presence on Friday afternoon at their spring training facility at Camelback Ranch in Glendale, Arizona. One was Clayton Kershaw, the reigning National League Cy Young Award winner, ace of the current Dodgers pitching staff. The other was legendary Hall of Famer Sandy Koufax, who stopped by camp to say hello to his former team.

Koufax, who has rarely spoken in public for the better part of the last four decades, sat down for a few minutes with reporters on Friday. Of the current Dodgers ownership situation, in which Frank McCourt is holding an auction to sell the team by April 30, Koufax said, "You're sad to see it going through this kind of change. Change is inevitable, but this is not the normal way it happens." 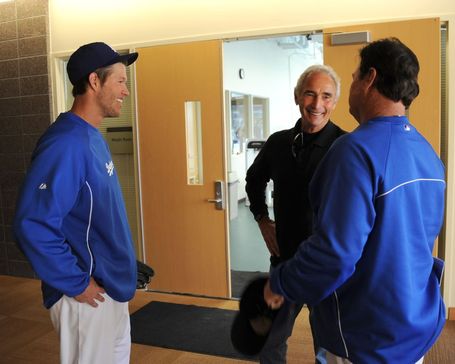 Asked if Kershaw had a ceiling, Koufax was full of praise. "No. How do you make up a ceiling? His only ceiling is time," Koufax said. "How long he will play, you don't know. But as far as talent is concerned, no."

The Dodgers signed pitcher Blake Johnson and shosrtstop Brandon Mims on Friday to minor league contracts. Johnson and Mims were two of 125 players who took part in the Dodgers' open tryout on Thursday at Camelback Ranch.

The Dodgers agreed to terms with all remaining players on their 40-man roster with between zero and three years of service time, 24 in all.

For more Dodgers news and notes, be sure to read True Blue LA.