The rivalry between the Los Angeles Dodgers and San Francisco Giants is one of the most storied in all of sport, dating back to 1890 when the Brooklyn Dodgers moved to the National League. But ESPN the Magazine got a chance to have a little fun with it recently, hosting both Tim Lincecum and Clayton Kershaw to be on the cover of the latest issue, with Timmy giving Clayton a big-ol' noogie for the cover photo.

This photo is awesome for multiple reasons. For one, these two aren't supposed to like each other, they're the aces of each other's their arch-nemesis. Secondly, Timmy is about is about four inches shorter, meaning Kershaw really had to bend down to get the shot. Kershaw outweighs him by a good 50 pounds or so as well.

Third of all, Timmy was simply owned by Kershaw last season, losing to the man three times with all of them one run games. Noogies count as payback too, though these two won't have a chance to face each other this season until the Dodgers and Giants meet up in early May with a three game set at Dodgers Stadium May 7-9. 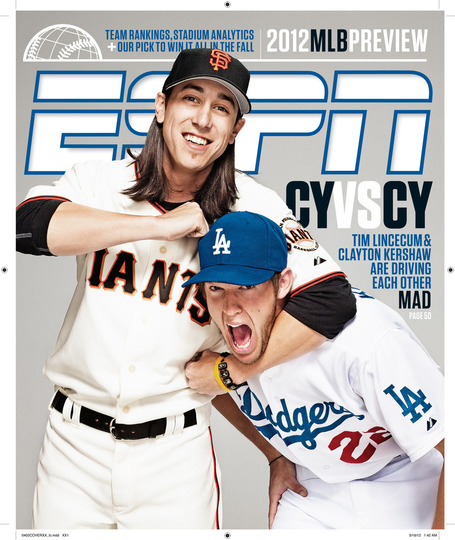 The latest issue of ESPN the Mag hits stands Friday, with this piece on Timmy and Clayton written by the Chronicle's own Time Keown.

For more on the Giants, head over to McCovey Chronicles. For the dodgers side of things, check out True Blue LA.