The Los Angeles Dodgers played their Anaheim neighbors on Monday, heading to Tempe Diablo Stadium to face the Angels. The game was broadcast back in Southern California by Fox Sports West, the Angels feed as it was an Angels home game. During the game, when Matt Kemp came to bat, this graphic came on screen (thanks to Bard in Black at True Blue LA): 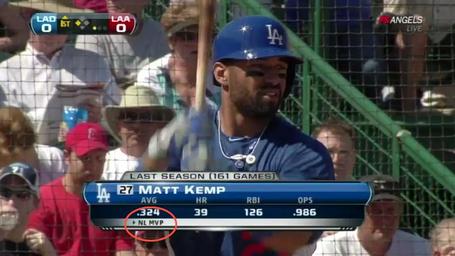 That all looks fine and dandy until you notice that Kemp didn't actually win the Most Valuable Player award, no matter how deserving he may have been. The award, of course, went to Ryan Braun of the Milwaukee Brewers, who was nearly suspended for 50 games for testing positive for a performance enhancing drug, but won his appeal with MLB.

Whether Braun was guilty or not, it isn't going to change the past any way. And Kemp wouldn't want an MVP under those circumstances, either. "I would want to win by them voting me, not by a default," Kemp said earlier this spring.

But we'll always have that Fox Sports West graphic.

For more on Matt Kemp and the Dodgers, be sure to visit True Blue LA.