There are few things better in the sports world, or in life, than listening to Vin Scully announce a baseball game. With pitchers and catchers reporting to spring training camps in Arizona and Florida over the next few weeks, baseball is starting to creep back into the forefront of our consciousness again, and that means listening to Scully is right around the corner. 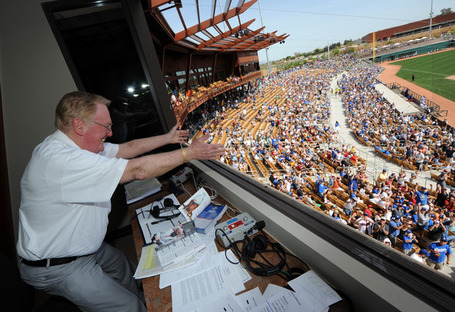 Which is why I was saddened somewhat when I saw the Los Angeles Dodgers announce their spring training broadcast schedule on Tuesday, and none of their 15 televised Cactus League games from Camelback Ranch in Glendale, Arizona were going to be called by the legendary Scully, who is about to enter his 63rd season with the Dodgers.

The press release from the team stated that Scully would call the freeway series game between the Dodgers and Los Angeles Angels at Dodger Stadium on April 3, but that Charley Steiner, Rick Monday, Eric Collins, and Steve Lyons would announce the remainder of the spring televised games.

Scully during the regular season calls home games and all road games within the National League West, but doesn't travel east of Colorado, and in recent seasons has usually made one trip or two to Arizona to call a few weekend contests in spring training. Seeing no Scully during spring training meant the end of an era of sorts.

Which is why there was welcome relief about an hour later, via Twitter, when the Dodgers announced that Scully would in fact call two Cactus League games, on March 17 against the San Francisco Giants and on March 18 against the Angels. The tradition lives on.

For more news on the Los Angeles Dodgers, be sure to read True Blue LA. Scully photo courtesy of Jon SooHoo / LA Dodgers.