Before the Dodgers began their series with Philadelphia on Monday, they made a flurry of roster moves. A move that was a pleasant surprise was that the Dodgers chose to stick with rookie outfielder Jerry Sands and jettisoned the veteran Jay Gibbons instead. The first hint that Sands was staying was when his name was in right field when the lineup was posted about three hours before game time. The way this Dodgers season has gone, with 13 players making 18 different trips to the disabled list, I immediately thought that Andre Ethier was somehow headed for the DL.

Luckily that was not the case, however. While the Sands choice was somewhat surprising, the Dodgers made another move that was absolutely shocking. They purchased the contract of shortstop Dee Gordon, and not only that but they plan to play him regularly at shortstop with Rafael Furcal out with a strained left oblique, as Don Mattingly told Ken Gurnick of MLB.com:

"We're going to play [Gordon]. I don't think we can bring him and sit him, but obviously, with just getting in today and [Lee], and then possibly [Cole Hamels on Wednesday], I told Ned [Colletti], 'Do you want him to go against two of possibly the best five lefties in baseball the first two days out of the gate?' But yeah, we're going to play him." 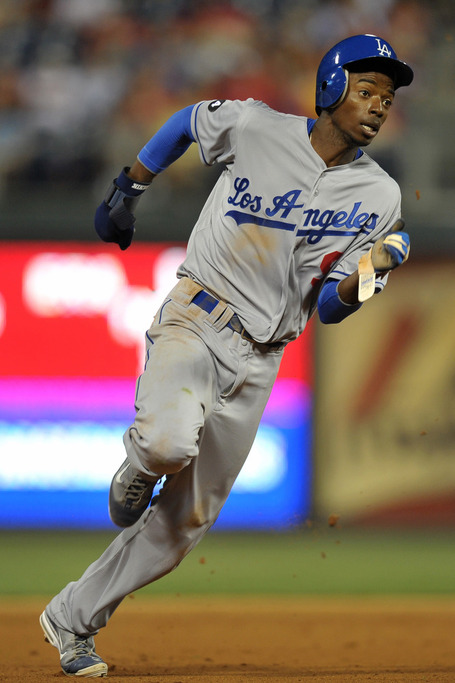 Gordon was rated as the 26th best prospect in MLB by Baseball America prior to this season, and he was hitting .315/.361/.370 in the offense-rich Pacific Coast League. It's doubtful he will be able to hit much, at least this season, but the Dodgers hope he brings defense and speed. One thing that does stand out watching Gordon play is his blazing speed. He was used as a pinch runner on Monday night, and went from first to third so quickly that I nearly convinced myself Gordon could have scored from first on a single.

Numerous injuries have accelerated the timetable of the Dodgers' top prospects, and all have significant roles on the Dodgers now. On Tuesday, Gordon is expected to start his first game at shortstop, with Sands likely in left field, and pitcher Rubby De La Rosa will make his first major league start. Win or lose, these young Dodgers should at least provide some excitement.

For more news and information on the Dodgers, be sure to read the SB Nation blog True Blue LA.