The Most Memorable Freeway Series Game: The Dodgers No-Hit Win Over The Angels

Share All sharing options for: The Most Memorable Freeway Series Game: The Dodgers No-Hit Win Over The Angels

The Angels and Dodgers resume their interleague rivalry Friday night at Dodger Stadium, the first of two straight weekends these two teams will meet. The most memorable game in the Freeway Series between the Dodgers and Angels is notable if only for its linescore:

On June 28, 2008 at Dodger Stadium, the Dodgers were held by Jered Weaver and Jose Arredondo without a hit...but they won. The Dodgers were in a dark place offensively in late June 2008; Rafael Furcal had been sidelined since the beginning of May, and they were about a month away from trading for Manny Ramirez.

Matt Kemp led off the fifth inning with a cue ball grounder that eluded Weaver for an error. Kemp then stole second base and advanced to third on a throwing error by catcher Jeff Mathis. A Blake DeWitt sacrifice fly brought home the game's only run. 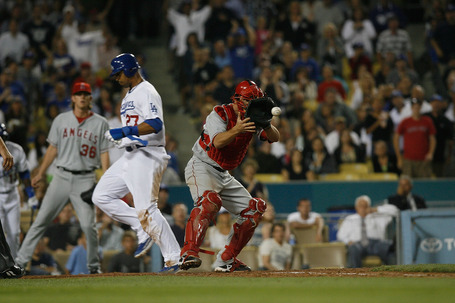 Matt Kemp reached on an error, advanced on another error, and scored the game's only run on a sacrifice fly (Getty Images)

The Dodgers were only the fifth team since 1919 to win without collecting a hit, and the first since 1992. Chad Billingsley pitched seven scoreless innings for the win, and though he didn't yet know it, Billingsley foreshadowed in talking with Dylan Hernandez of the Los Angeles Times:

Asked whether any part of him sympathized with Weaver, Billingsley laughed.

He paused, and then continued, "I don't want to ever experience that."

Billingsley did experience that, or at least got really close, earlier this year, when he allowed just one hit to the Diamondbacks, but lost 1-0. It was the first loss by the Dodgers when only allowing one hit since 1914.