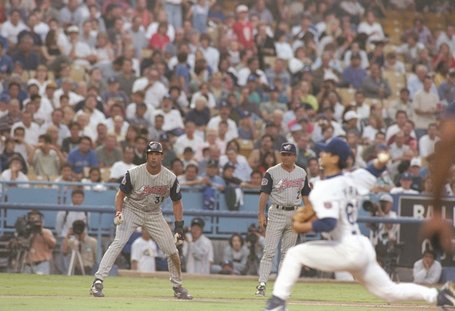 This was in 1997, back when fans showed up to Dodger Stadium (Getty Images)

Chuck Finley started for the Angels, opposed by Chan Ho Park and the Dodgers. This was back when Jim Edmonds roamed center field in Anaheim, and the Dodgers two through five hitters -- Todd Zeile, Mike Piazza, Eric Karros, and Raul Mondesi -- all hit 30 home runs that season. Zeile hit a home run in the eighth inning to cut the Angels' lead to 3-2, but things looked bleak when Troy Percival came in to close it out for the Angels.

Wilton Guerrero -- remember him? -- led off the ninth inning with a single, and was sacrificed to second base by Brett Butler. That brought Zeile to the plate again, but Percival's second pitch to Zeile was wild, and this was the time when the Dodgers had a ton of foul territory, especially behind the plate. Guerrero scored all the way from second base, conjuring up images of Kirk Gibson doing the same in 1988, to tie the score.

Shaken, Percival's next pitch to Zeile, a fastball, was hit deep into the left field bleachers, giving the Dodgers the walk-off win. "I broke down on that pitch. I threw him a hard one and he knew it was coming," Percival said after the game. It was quite a memorable way to begin a regular season rivalry.