Share All sharing options for: Most Memorable Freeway Series Games: Chan Ho Park Gets His Kicks

The Dodgers host the Angels on Friday night in the first of a three-game series at Dodger Stadium, and the first of two straight weekends these two teams will play their Freeway Series. The third most memorable game between the Dodgers and Angels happened on June 5, 1999, and was remembered for a kick.

Chan Ho Park started for the Dodgers, and fell behind 4-0 thanks to a grand slam by Angels catcher Matt Walbeck in the fourth frame. Starting for the Angels was former Dodger Tim Belcher, who started two games in the 1988 World Series for L.A. In the fifth inning, Park was batting, and he laid down a sacrifice bunt, which was fielded by Belcher.

Belcher fielded the ball up the first base line and tagged Park, only a little too hard. After a few words between the two pitchers, Park unleashed a spinning kick at Belcher, and benches cleared. "He tagged me hard and it hurt," Park told the Los Angeles Times after the game. "I said, 'What's up with that?' He said, 'Get the . . . out of here.' What was I going to do?" 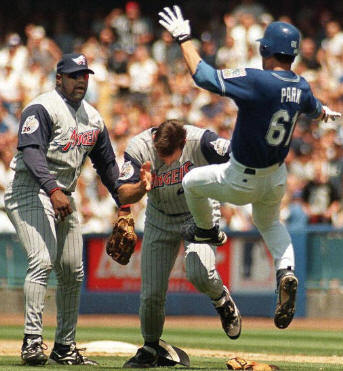 Two unfortunate uniform choices: the periwinkle pinstripes for the Angels, and the rare blue jersey tops for the Dodgers

Understandably, the Angels weren't too fond of Park's actions. "The last time I saw someone kick somebody in a fight, it was my little sister kicking my brother for taking her Barbie doll," shortstop Gary DiSarcina said to Bill Plaschke. "Is this the new Dodger blue? Karate kick blue?" As for the game itself, the Dodger rallied for seven unanswered runs, taking the lead on a grand slam by Devon White, and won the game 7-4.