Wednesday night at Dodger Stadium marks the first game in Los Angeles between the Dodgers and Giants since they battled for four games during the opening weekend of the baseball season. After opening day on Thursday, March 31, a Giants' fan named Bryan Stow was beaten in the parking lot, and has been hospitalized ever since. The event was senseless and disgusting, but some events that have followed have had a silver lining.

I don't want to make light of the attack on Stow, because it was obviously terrible, but the negative outcry toward the Dodgers has more to do with Frank McCourt than it does the Dodgers/Giants rivalry. In 2003, a Giants' fan named Marc Antenorcruz was shot and killed in the Dodger Stadium parking lot and there was nowhere near the backlash that there is today. The fact is, Dodger fans hate their current owner, and the Stow tragedy was just another straw that broke the camel's back of public perception.

While there are valid reasons to criticize McCourt's response to the beating of Stow -- it was too slow, statements and press releases have seemed more reactive than proactive, self-serving, and public relations driven -- the reaction of the players of both teams have been nothing but positive. 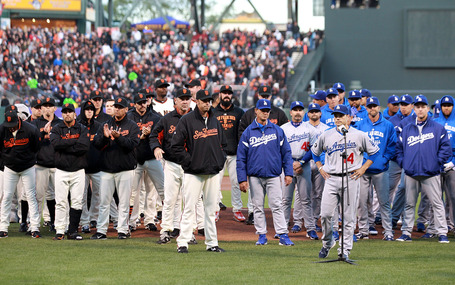 Before the Dodgers and Giants played in San Francisco on April 11, players from both teams met on the field in San Francisco, while Jamey Carroll and Jeremy Affeldt addressed the crowd. "There’s no room in this game for hatred and violence. It is about respect," Carroll said, per the Associated Press. "This is America’s national pastime and let’s keep it that way." Affeldt added:

I don’t have to tell you about the Dodgers-Giants, it’s one of the most storied rivalries in the history of the game but in honoring that rivalry and honoring the Stow family, you have to remember when these two teams get on the field and play, we’re competitive.  But when the last out is made, that rivalry ends on the field, so please respect that.

It was a great gesture by both teams, and the positive response from the crowd as a great response. I'm sure police presence will be heavy both tonight and tomorrow at Dodger Stadium, so the odds are low that anything will get out of hand. There are thousands of fans of both the Dodgers and Giants that just want to watch and enjoy baseball, and their experience shouldn't be ruined by a few bad apples. That the players on the field know and respect that is a step in the right direction.

For more news and information on the Dodgers, be sure to read the SB Nation blog True Blue LA.