The Beginning Of The End For Frank McCourt

MLB will appoint a representative in the next few days to oversee the day-to-day operations and finances of the Dodgers.

Share All sharing options for: The Beginning Of The End For Frank McCourt

The one thing we know, after Wednesday's decision by Major League Baseball and commissioner Bud Selig to oversee day-to-day operation of the Los Angeles Dodgers, is that the endgame is here for Frank McCourt. His days as owner of the Dodgers are clearly numbered. What we don't know, however, is just how long this process will take.

When McCourt bought the Dodgers from Fox in 2004, the purchase was heavily leveraged and there were concerns that McCourt would have the financial wherewithal to run a major league baseball team. The team did make four playoff appearances, including two NLCS runs, in McCourt's first six years at the helm, but goodwill with the fans has completely eroded.

Frank and Jamie McCourt have been embroiled in a very heated, and very public divorce for nearly two years, and the sordid details of their reign at Chavez Ravine that have leaked during their battle have sullied any on-field Dodgers success. The two have lived lavish lifestyles using hundreds of millions of dollars of Dodgers profit through the years, and are subsequently being investigated by the IRS. I'm not going to pretend other owners don't indulge, but sometimes ignorance is bliss. What fans don't know is sometimes best for them, and fans would rather hear about a team spending on a left fielder rather than an Olympic-sized swimming pool for the owner. 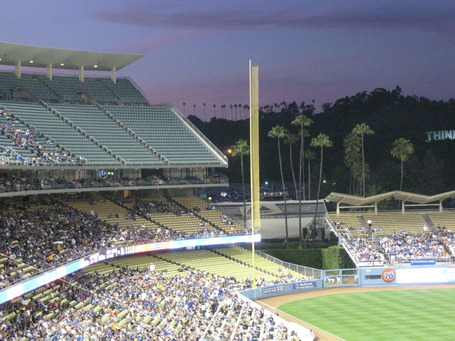 The erosion of confidence in the team has been apparent this season at Dodger Stadium. Attendance has dropped significantly. During the Dodgers' second homestand of the year, three of the last five games have had crowds under 30,000, something that hasn't happened since 2004. Don't forget, that number reflects tickets sold; judging by the actual number of people at the park, it appears attendance has been far lower. This has been the perfect storm of negativity in Los Angeles: Fans are fed up with McCourt, the Dodgers are struggling on the field, and the perception of Dodger Stadium as an unsafe venue has skyrocketed since the opening day beating of Bryan Stow; the too little, too late, PR-driven response from McCourt was distasteful.

The fact is, Dodgers fans are ready for Frank McCourt to go.

Bud Selig is all too willing to help that happen. It should be noted that there is blood on Selig's hands as well, as Selig was the one who approved McCourt and his leveraged purchase of the club seven years ago. It isn't known what the final straw was for Selig to step in, but it might have been McCourt taking out a personal $30 million loan from Fox last week to help meet team expenses, including payroll.

McCourt, for all his faults, is a fighter. He released a terse statement Wednesday night, saying, "Major League Baseball sets strict financial guidelines which all 30 teams must follow. The Dodgers are in compliance with these guidelines. On this basis, it is hard to understand the Commissioner's action today."

It seems likely that McCourt will sue MLB for stepping in to take control of the Dodgers. However, it's hard to imagine that Selig would take such a step without knowing the potential road blocks ahead. This isn't the 2002 All-Star Game, after all. McCourt needs help if he wants to continue to own the team. He needs the cash from a new television contract to buy out Jamie, and Selig can block any deal.

When Fox owned the Dodgers, fans hated that era too. They wanted  a new owner, and got Frank and Jamie McCourt. It worked, for a while. There is a decent chance that any new owner of the Dodgers won't be a white knight riding in on a horse to save the day. However, Dodgers fans are fine with that uncertainty. Bring on the devil they don't know over the devil they are all too familiar with.