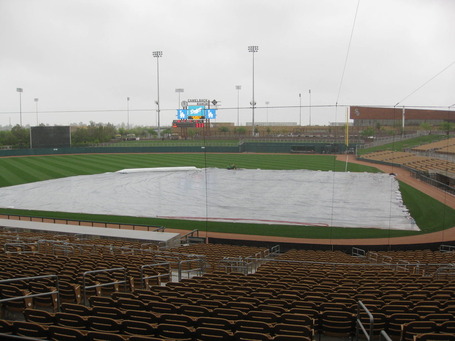 It is raining quite hard at Camelback Ranch today, and looking more and more likely that both Dodgers games today will be rained out. The day game, against the Oakland A's, has already been canceled. The short-term outlook for Dodgers' third baseman Casey Blake is equally as gloomy, as it is looking more and more likely that he will begin the season on the disabled list. Blake hasn't played since March 12, and has inflammation in his back.

With only 10 days remaining until opening day, Blake is running out of time to get the kind of preparation he needs to be ready for opening day. "I know guys, what they do is they start targeting opening day. They want to be ready, and do stuff and tell you stuff to get to opening day," manager Don Mattingly said before the game. "For me, I'd rather, if it's five days or seven, eight, 10 days into the season and he's healthy and ready to go and gets to that point, and have him the rest of the year, instead of trying to bang around and not being ready to go, and have a guy who's 100% on opening day."

The Dodgers can retroactively place Blake on the disabled list as early as today, with April 5 as the earliest date he can return. Mattingly also said pitchers Jon Garland and Vicente Padilla are progressing nicely, but won't be ready for opening day. Mattingly wouldn't rule out the possibility of Garland being ready when by the time the Dodgers first need a fifth starter, on April 12 in San Francisco.

For more Dodgers spring training news and information, be sure to read the SB Nation blog True Blue LA.