Share All sharing options for: Gimenez Homers In Dodgers 6-4 Win Over Diamondbacks

The Dodgers captured their second straight win of the spring, with a come-from-behind 6-4 victory over the Arizona Diamondbacks at Camelback Ranch on Thursday. Eighth inning home runs by Hector Gimenez and Gabe Kapler completed the comeback, with the three-run shot by Gimenez the key blow. Chad Billingsley threw five innings in his fourth outing of the spring, throwing 83 pitches.

Gimenez has played catcher and first base this spring, and is vying for a spot on the bench when the Dodgers break camp in less than two weeks. "They know I can play first and I can be behind the plate too," said the 28-year old Gimenez, who spent last season in Double A in the Pirates' system. "The last couple of days I haven't been behind the plate a lot, but I'm still work on catching every day, trying to work wherever they give me an opportunity to play."

The Dodgers wore green jerseys and caps today, which the players autographed for charity, to be auctioned off later this season. 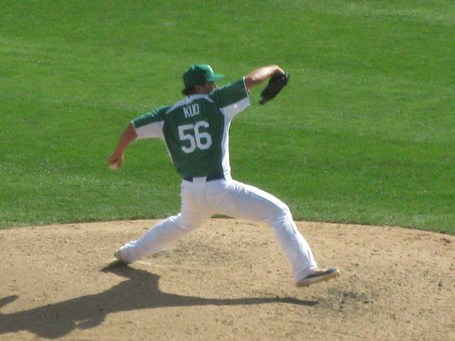