The Dodgers had their only day off of the Cactus League on Wednesday, and they are back in action today at Camelback Ranch to face the Arizona Diamondbacks. The Dodgers sent Chad Billingsley to the hill today, making his fourth start of the spring. Since it is St. Patrick's Day, the Dodgers are wearing green uniforms and green caps (though they are wearing blue helmets while batting), as seen here by Clayton Kershaw and Casey Blake, watching today's game from the dugout. 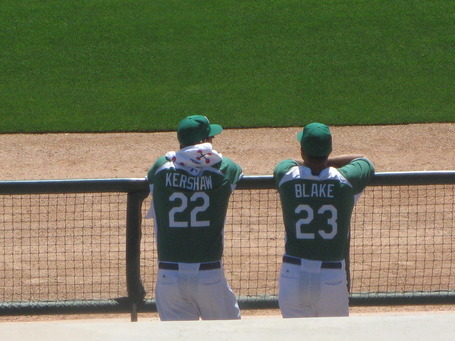 Tim Redding, who is vying for the fifth starter job, at least until Jon Garland returns from his oblique injury, pitched in a B game this morning at Camelback Ranch. Redding is on a minor-league contract, and doesn't have an out clause in his contract until June 15, according to Dylan Hernandez of the Los Angeles Times. That will affect Redding's battle with John Ely, who is already on the 40-man roster and can be optioned to the minors without risking losing him to waivers.

Today also marks the return of Jay Gibbons, who was having vision problems but after a trip to San Francisco to see an eye specialist, he can see clearly now. Gibbons, who hadn't played since Sunday, is 2-for-22 this spring.