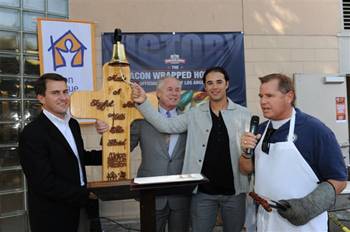 Andre Ethier of the Los Angeles Dodgers has a food blog called 'Dining With 'Dre' (although he hasn't update it in more than a year), although his most noteworthy culinary contribution is his work with local food banks. Ethier was a spokesperson to help make the bacon-wrapped hot dog the official hot dog of Los Angeles, and as a result Farmer John donated over 52,000 pounds of food to local food banks. Ethier today was at the Union Rescue Mission in downtown Los Angeles, where the organization received the largest meat donation in its 119-year history.

As part of its pledge to donate over 52,000 pound of food, one for every vote received for the bacon-wrapped hot dog, Farmer John donated 25,000 pounds of food today to URM.  "This campaign was a natural fit for me to help make the Bacon Wrapped Hot Dog, a personal favorite, an official part of Los Angeles history, and also to really be able to give back to those in need," said Ethier.  "Food banks, including Union Rescue Mission, often serve more than 3,000 people daily, and because of the votes of Angelenos in support of this campaign this food is going right where it is needed most during this holiday season."

For more news on Andre Ethier and the Dodgers, be sure to read the SB Nation blog True Blue LA.