Dr. Crazy Light, Or How I Learned To Stop Worrying And Write About a Basketball Shoe

Adidas took a whole bunch of fashion and sports reporters, gave them their new basketball shoe the Crazy Light II, and said to go crazy at the LA Clipper facility. This is what happened.

Share All sharing options for: Dr. Crazy Light, Or How I Learned To Stop Worrying And Write About a Basketball Shoe

Hi, resident LA Galaxy and Chivas USA writer here. When adidas contacted me to try out their new Crazy Light II at the Clipper practice facility, I'll admit I was skeptical. I hadn't played basketball since grade school, I'm a soccer girl through and through. Still, it was intriguing enough that I had to go see what all the fuss over this adidas Crazy Light II was about.

Many moving pieces had to fit together to make this moment. From the Clippers point of view, they had to finally build a practice facility. For much of their history, the Los Angels Clippers have been content to pick up the Los Angeles Lakers' sloppy seconds. The Lakers move out of the Sports Arena, the Clippers move in a decade later. For a good chunk of their history, the Clippers practice at Veterans Park in Carson while the Lakers practiced at LA Southwest College.

These were remnants of the old NBA, which became cool under Magic and Bird and Jordan, but for whom expansion was still problematic (see Grizzlies, Hornets) and teams were still tenants and not home owners. When AEG took the Kings and Lakers under the same roof and built a state of the art practice facility in El Segundo, the Clippers were happy to take over at LA Southwest College.

This was the new NBA, where free agents were wooed. The Clippers once again followed the Lakers, moving in to Staples Center. In 2005 the Clippers staked a claim in this new NBA, building a $50 million facility in West LA.

It's really quite something. There are two courts in the facility, one a replica of the one at Staples Center. The locker room is specious and comfortable, there's a players lounge, and a theater to watch film; large gym complete with pool.

One year later, adidas received the exclusive NBA contract about the same time they got MLS as well. Which is where I come in. In the case of the NBA, the new 11 year contract signed in 2006 was a result of adidas buying Reebok which had been the official outfitter of the NBA. Adidas and hip hop culture (which of course includes basketball) have been intertwined since the days of Run DMC.

Derrick Rose is adidas' big NBA star. To make a Clipper connection, Chauncey Billups is an adidas man. With these adidas Crazy Light II's, they went in a different direction. They needed young and fresh. Who's younger and fresher than college kids? 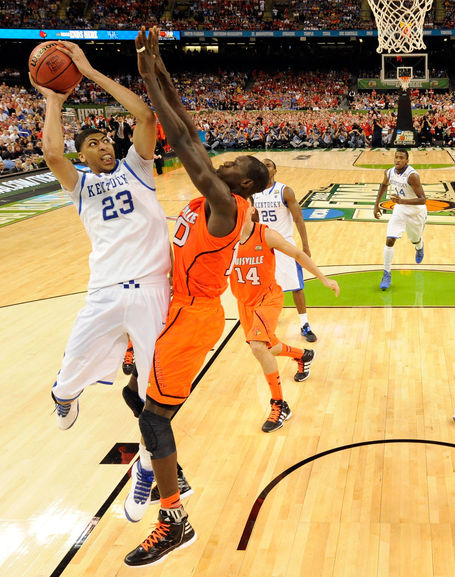 Look at the lead photo, and check out that one of Louisville. These were no mere coincidence. Adidas outfitted Baylor and Louisville in the tournament with their new Crazy Light II. They were also given jerseys and socks in neon versions of their respective school colors to tie in to the shoe. They were given a black version with neon laces. We got to test out the full neon. 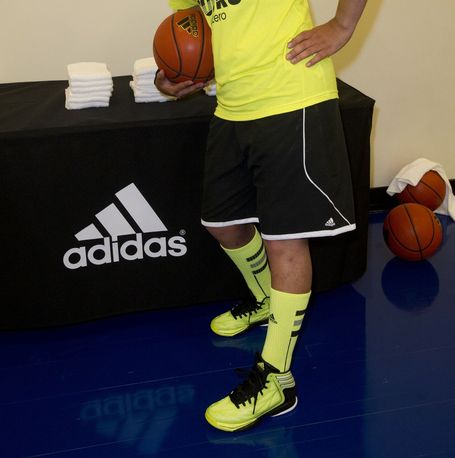 I had just come off the court, crazy tired, so you're not gonna see the full version of this photo; anyhow this is about the shoes not me. They are the lightest basketball shoe ever produced at 9.5 ounces, and you can see I'm wearing the same socks Baylor were given.

The shoe also has a structural element to it called the SprintFrame and SpritWeb which give it much less give than what I remember basketball shoes feeling like. It reminded me more of my soccer cleats, where once you're in the shoe you are in. This means a feeling of tightness before you get going, but once you are playing in them it feels like wearing nothing at all.

Those are my two biggest takeaways. The colors definitely appealed to the other writers at the event, and I think they'll appeal to the youth market adidas is going after here. I tend to be a more muted traditionalist, give me a pair of adidas Originals and I'll wear them everywhere, so I'll stay away from the aesthetics.

However playing with them, once I found the right balance of hydration and protein that I didn't feel like I was going to pass out anymore, I felt like I could do no wrong. I was throwing up reverse layups from outside the paint, jumpers from just inside the arc, and my feet felt light as a feather.

The shoe is micoach compatable, which brings up another point. It's hard not to feel, with neon colors and micoaches, that adidas is a follower in this market and not the leader. Certainly micoach didn't come preloaded on my iPhone.

The question then becomes, are they doing it better. Certainly lighter and faster seems to be adidas' calling card these days. Will we see Chauncey Billups rocking Crazy Lights next year? Maybe. But I'm certain we'll see them around LA High schools as soon as they drop in late May.