Angels To Unveil Throwback Uniforms Against Mariners This Weekend

Share All sharing options for: Angels To Unveil Throwback Uniforms Against Mariners This Weekend

The Los Angeles Angels are going to be throwing back to an old Los Angeles minor league franchise uniform for their series this weekend with the Seattle Mariners. On Saturday afternoon the club will wear a jersey and hat from the Pacific Coast League Los Angeles Angels. The PCL Angels played at Wrigley Field in South Los Angeles, and were purchased by Walter O'Malley when he moved the Dodgers out west.

We have a photo of what the uniforms will look like after the jump.

The photo is courtesy of the Angels' official Twitter feed. 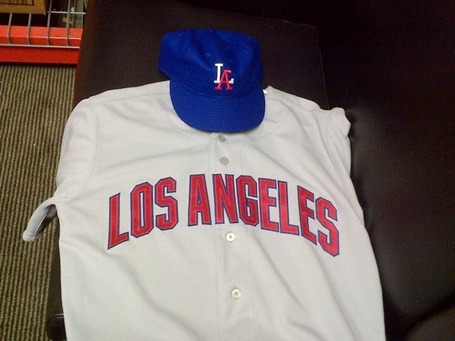 When O'Malley bought the Angels, he borrowed the interlocking LA cap logo for his Dodgers before moving the Angels to Spokane where they became the Indians. When Gene Autry purchased the Los Angeles American League franchise, he payed O'Malley for the right to call them the Angels.

Those expansion Angels would play their first year in Los Angeles Wrigley Field, which was built after Chicago's ballpark but was the first to bear the Wrigley name. Opened in 1925, O'Malley traded the deed to that ballpark to the City of Los Angeles for the land Dodger Stadium currently sits on.

Wrigley Field was only 340 to left field and 339 to right, so that one year the American League Angels played there they hit a then record 248 home runs, and a still standing record 71 wins as an expansion team. Not coincidentally, Wrigley Field was the setting for the TV show Home Run Derby, which you can catch occasionally on ESPN Classic.

First pitch for Saturday is scheduled for 4:15 p.m. PT from Seattle. Jerome Williams and Felix Hernandez are the probable pitchers for the matchup.

For more on the Angels and their new uniforms, be sure to check out Halos Heaven.