After six weeks in Tempe, Arizona, the Los Angeles Angels returned home to Anaheim Monday night to host the Los Angeles Dodgers in their annual Freeway Series. The first game is in Anaheim, and the last two will be played in at Dodger Stadium on Tuesday night and Wednesday afternoon.

Angels outfield prospect Kole Calhoun was presented with the 2012 Fred Haney Memorial Award by the team on Monday night before the game, given annually to the top rookie in Angels spring training camp. Cole, who was drafted by the Halos in the eighth round in 2010, hit .333/.378/.524 with six doubles and a triple in 45 plate appearances.

Here is Calhoun getting his award from Angels manager Mike Scioscia before the game: 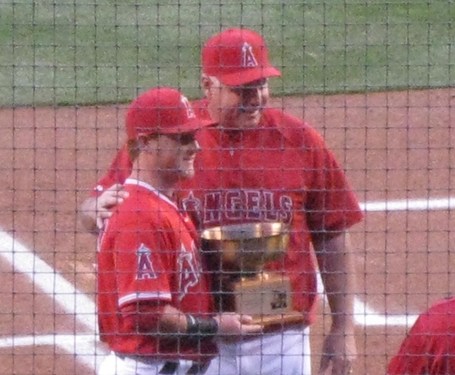 For the latest on the Angels, be sure to check out Halos Heaven.