Heading into the 2011 season, there was some debate over just who was the top prospect in all of baseball: Bryce Harper of the Washington Nationals or Mike Trout of the Los Angeles Angels. Luckily for Arnie Beyeler, the manager for the Scottsdale Scorpions in the Arizona Fall League, he won't have to choose between the two, as Harper and Trout are both on the same AFL team. 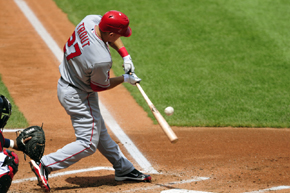 Mike Trout, against the Cleveland Indians on July 27 (Getty Images)

The following Angels will join Trout in Scottsdale:

The Arizona Fall League begins play on Tuesday, October 4, and each team plays a 38-game schedule running through November 17.

For more news and information on top Angels prospects like Trout and Segura, be sure to read Halos Heaven.